Morton's Toe, otherwise known as having a long second toe, is a foot deformity where a person's second toe is longer than their big toe, the Hallux. While people once had no choice but to live with it, medical advances now favor toe-shortening surgery as an effective treatment. The surgery relieves pain and restores normal alignment of the toes.

The condition is easy to recognize. According to experts, when looking at a person's foot, you should see that the first toe is usually the longest as well as the largest. The remaining toes are shorter and smaller, decreasing proportionately in size. With a foot exhibiting Morton's Toe, the first toe may be either equal in length or somewhat shorter than the second toe. Since having a longer second toe is hereditary, it is found just as much in woman as it is in men. While only about 10 percent of the world populations are born with Morton's toe, about 80 percent of those with it suffer from chronic pain.

Dr. Dudley Morton, Father of Morton's Toe, wrote extensive articles on the repercussions of having a long second toe; he claimed that it can result in the following: back, knee, and hip pain, arthritis, fibromyalgia, bunions, hammer toes, and temporo-mandibular joint pain. Morton's Toe is a genetic factor; it is not linked to any particular ethnic group. However, it is often unofficially known as “having the classic Greek foot."

In the 1900s, the long second toe was found more frequently in areas considered to be Celtic, such as Scotland and Ireland. There are stories stating that having a long second toe has come from farmers, as well as hunter gatherers; it is possible that the toe helped brace the person as they aimed their spear. In addition, the English have Anglo-Saxon feet, known for the more "normal" big toe as well as a wider spread. Think of it this way: Anyone with a long second toe shares this distinction with the Statue of Liberty!

What Causes Morton’s Toe?
The underlying cause for this condition could be multifaceted. The most common reason is usually due to a long proximal phalanx. The proximal phalanx is the first knuckle bone in the toes. When this bone is too long, it will push the end of the toe out and that would lead the second toe to be longer than the first toe.
The second most common problem could be a long middle phalanx, which is the middle bone in the knuckle of the toe. This would eventually lead the whole toe to be longer.

The third most common cause could be due to a short bone in the big toe. This problem could be either due to a short metatarsal in the big toe, or a short proximal phalanx, otherwise known as knuckle bone. Other possible causes include previous surgery, a childhood injury that stunts toe growth, or a genetic malfunction. This could lead to a short bone. The problem could also be caused by a long second metatarsal bone. There might be many more reasons for the second to toe to be longer but we will not discuss this here.

Why Get Toe Shortening Surgery?
When the second toe is longer than the first toe, the parabola that is formed by the toes will not function normally. This means excess pressure is placed on other toes. This could lead to pain at the bottom of the foot. If there is pain at the bottom of the foot, the problem could cause a painful callus or metatarsalgia, otherwise known as inflamed bone. It could also lead to irritation at the top of the toe, which can be red and painful as seen in some of these pictures.

If the irritation happens over a long period of time, it may lead to contracture of second toe or forming of thick skin on top of the toe. The thick skin or otherwise known as corn could be painful or it may be just unsightly.

Dr. Ravaei has encountered many patients who have resorted to "bathroom surgery" to try to get rid of this disfigurement. When the case is not severe, some patients place make up on the corn to make it less noticeable. Other patients have used corn pads with acid that will lead to a burn on the skin. Many times, the corn pad leaves a mark that is worse than the original corn.

Often, the condition may be unknowingly serious, as it can cause pressure on the top of the metatarsal (the ball in the back of the second toe). The metatarsal bones will usually push against the skin, causing bumps to emerge behind the toes. Patients with Morton's toe usually develop calluses behind the second toe, as well as on the inside and outside parts of the foot where the toes are connected. 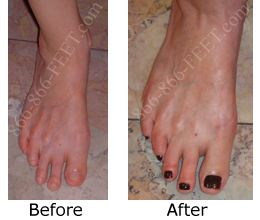 Toe-Shortening Surgery and Other Treatment
In some cases, wearing proper footwear helps manage Morton's toe. In addition, wearing appropriate foot orthotics, also known as shoe inserts, that feature arch support may help keep the foot aligned, However, Dr. Ravaei has met with patients that have pain that does not subside even after switching to more comfortable footwear. Therefore, the only option they are left with is a surgical correction, which involves shortening the toe. This generally leaves little to no scars on the foot. Recovery depends on the patient's health, age and activity level, but is usually fast.

If there may be an underlying problem such as arthritis, pain, or discomfort wearing shoes, insurance covers the procedure. Additionally, Dr. Ravaei offers the patient a free initial consultation in order to provide the appropriate treatment method to suit the patient's needs. He also provides custom-made orthotics if needed, which cost close to $400. Highly experienced and board-certified, Dr. Ravaei is proficient at applying appropriate strategies and takes care to treat each patient individually.

This is a dialog window which overlays the main content of the page. The modal includes map links for each of our locations. Pressing the Close Modal button at the bottom of the modal will close the modal and bring you back to where you were on the page.