Bunionnettes No Small Problem for Sufferers

While not as common as bunions, tailor’s bunions, also known as bunionnettes affect thousands of people each year, causing considerable pain and discomfort. Many people take a “grin-and-bear-it” approach to podiatric issues, not realizing that foot problems can lead to severe mobility problems later in life and that foot doctors can treat most podiatric conditions. 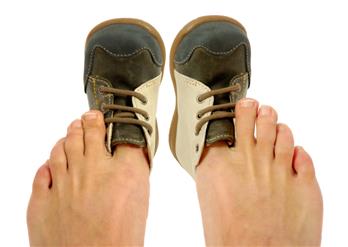 Tailor’s bunion is a deformity of the foot characterized by a bump or protuberance on the outer side of patients’ fifth toe or metatarsophalangeal joint. In many cases, patients’ fifth toes will turn inward as a result of bunionettes. The problem often seems benign at first, but over time these bumps can grow and cause a significant amount of pain to people suffering from this condition.

Tailor’s bunion gets its name from the tailor profession. Years ago, tailors often sat cross-legged all day as they worked, causing the outside edge of their feet to constantly rub against the ground. The rubbing often led to bunionnettes, hence the name tailor’s bunion.

Foot problems are quite common. According to the New York Times, about 75 percent of Americans will experience foot pain or issues at some point in their lives. Far too many people with foot issues do not seek treatment for these issues, which typically only get worse and become more painful over time. Chronic foot pain can limit patients physical activity, which can have other health implications such as increasing the likelihood of obesity and obesity related illness. Seeking treatment for bunionettes and other foot issues is important for maintaining health.

These symptoms are often exacerbated when patients wear shoes that rub against the protuberance or bump, irritating the soft tissues in the area and causing inflammation.

Tailor’s bunion can be caused by genetics, as inherited faulty bone structure can result in this problem. Wearing narrow, tight-fitting shoes may also contribute to the problem, as constant rubbing can aggravate the area around the metatarsophalangeal joint.

Foot doctors can easily diagnose tailor’s bunions by using x-ray imagery to take a look at the bone structure of the foot. A visual examination of the affected area by the doctor will also aid in diagnosis.

The good news for tailor’s bunion sufferers is that foot specialists can often easily treat this condition without having to resort to invasive surgical procedures.

Common treatments for bunionettes include:

Bunionnettes may be prevented by wearing shoes with adequate toe room. People with a family history of bunionettes may want to avoid wearing heels or narrow-toed shoes to avoid developing tailor’s bunion.

Surgery for Tailor’s Bunion is considered when other treatment options have failed and the patient continues to experience pain. Foot surgeons will examine x-rays and other factors such as age and activity level when determining what course of surgery to follow. Surgery may be ruled out if the patient has an infection at the fifth toe or the site of the bunionette deformity. Poor circulation may also prohibit surgery, as it can result in problems with the bone or recovery post-surgery.

Foot surgeons have a number of options for treating Tailor’s Bunion, including:

With regard to aftercare, patients will typically need to wear a surgical shoe, boot, or splint for three to 12 weeks. Recovery times will vary based on the extent of surgery, patient health, and foot surgeon expertise.

Patients will be required to keep their foot elevated for the first few weeks after surgery. They may need a walker or crutches for a few weeks post-operation. Stitches are usually removed about two to three weeks following the procedure. Patients may not get the surgical area wet until after stitches are removed.

With regard to physical therapy, foot doctors may ask their patients to perform knee and ankle exercises to help them maintain flexibility. Swelling after surgery is usually an issue and does not typically subside until weeks after the operation.

Most of the time, bunionettes do not recur after surgery. Patients are often advised to avoid wearing tight shoes in the future, however.

This is a dialog window which overlays the main content of the page. The modal includes map links for each of our locations. Pressing the Close Modal button at the bottom of the modal will close the modal and bring you back to where you were on the page.